The Team USA vs. Team Europe Celebrity Golf Cup for the Ryder Cup Trust is heading to St. Moritz, Switzerland, for the first time this year from 22 to 25 July.
**The Engadine Golf Club** will host the third edition of this unique Invitational Celebrity Pro Am event, to be known this year as the St. Moritz U.S. Celebrity Golf Cup (http://www.stmoritzcelebritycup.com), over its two courses, Samedan and Zuoz, located in the heart of the Engadine Valley.

*The two courses at the Engadine Golf Club; Samedan (l) & Zuoz*
The St Moritz U.S. Celebrity Golf Cup sees celebrities matching up against each other in two teams of 12 representing Europe and the USA, reflecting the format of the professional Ryder Cup, which is regarded as one of sport’s most spectacular and enthralling team competitions.
The celebrities lining up for Europe will include internationally-renowned golf coach, *David Leadbetter*, the World’s Longest Drive Champion, *Joe Miller*, and Italian *Marco Simone*, former professional footballer at AC Milan, whilst the US team will feature American jazz star, *Kenny G*, former Quarterback for the Washington Redskins, *Joe Theismann*, and the Chicago Bears’ *Jay Feely*, +2 handicapper and former NFL player *Josh Schobee* and Arizona Cardinals’ *Larry Fitzgerald* who was the winner of the 2018 Pebble Beach Pro Am.
A host of invitation-only amateurs – a total of 72 starting slots are available – will play alongside the various superstars as each celebrity will lead a team for the much sought-after trophy.
*”With St. Moritz we have once again opted for an extraordinary venue for the Ryder Cup Trust Celebrity Golf Cup as the courses in the Engadine are among the most beautiful in Europe,”* said Chairman Susan Feaster recently at the Yacht Club of Monaco to kick off the 2019 edition of the tournament.
Under the patronage of H.S.H. Prince Albert II of Monaco, the first two Team USA vs. Team Europe Celebrity Golf Cups for the Ryder Cup Trust took place in Monaco in 2016 and 2018. H.S.H. Prince Albert II served as the Honorary Captain of Team USA and launched the event by chipping fish balls off the stern of a Fraser Super Yacht.

*Team USA vs. Team Europe2018 Monaco U.S Celebrity Golf Cup
Presented by H.S.H. Prince Albert II*
*”It is indeed a special honour to be able to host the prestigious Team USA vs. Team Europe Celebrity Golf Cup at our two golf courses in the Engadine Valley,” said Ramun Ratti, Managing Director, Golf Engadin St. Moritz AG which manages both courses at Zuoz and Samedan. “We are very much looking forward to welcoming both the celebrities and the amateurs in the summer to play our courses and enjoy our mountain scenery and Alpine hospitality.”*
As part of the programme, the Ryder Cup Trust’s 2019 Lifetime Achievement Award will be presented to David Leadbetter at a Gala Dinner at the luxury Badrutt’s Palace Hotel in St. Moritz, the official hotel for the tournament. The Ryder Cup trophy will also make a special appearance at the Awards Gala.
To request an invitation for this unique Celebrity Pro Am event, visit htpp://www.stmoritzrydercup.com/en/program#thursday-25-july
For more information on Golf Engadin St Moritz, go to http://www.engadin-golf.ch. 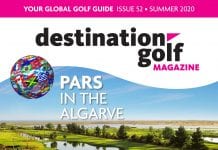 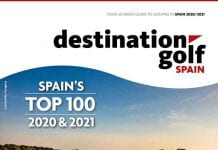 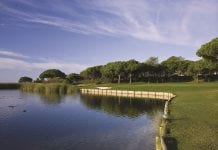 Read about the renovations at @IslandGolfClub by Martin Ebert (of @golfarchitects) in the Summer 2020 Destination Golf Global Guide. https://view.joomag.com/destination-golf-global-summer-2020/0802492001593683710?short& @Dest_golfguide

Yesterday's pic was of the 6th hole @RMusselburgh