Perhaps you’re thinking that Poland is not the obvious choice for a golfing holiday. When golfers want a week away they tend to flock south to Spain and Portugal, not east. I confess to having my doubts when I was invited to visit the region around Gdansk, but not anymore.Besides, I felt like a trailblazer. Poland is unknown for golf and that should lure golfers looking for new experiences, great value green fees and fairways that are practically empty. And let’s be honest, a few beers are an essential part of a golf break away, and Poland is not lacking in that department.
My invitation from the Polish Tourist Board to tour the eastern Pomeranian region, on the Baltic Sea, also included visits to local towns and, in particular, Gdansk. It was a good mix of golf, history and culture.

After arriving at Gdansk’s Mercure Hotel, we had been whisked away by Agnieszka Syroka [www.tourguidegdansk.com] on a two hour walking tour, first to the famous shipyards and the monument commemorating the birthplace of Solidarity and the fall of communism in central Europe, and then to the completely unexpected ‘old city’. The Royal Way is sandwiched between the Golden Gate, to the west, and the Green Gate on one of the waterways. And while much of Gdansk was destroyed during WWII, enough remains to show off the beauty of this 1,000 year old city.
Our hotel was conveniently located between the old district and the industrial and, at 17 storeys high, it promises spectacular views over the city.

Sierra Golf Club [www.sierragolf.pl/en/] is 40 minutes to the north west. We headed straight to the 1st tee as the rain swept in. This elegant and beautifully maintained course starts gently but, as the rain eased off after an hour, so the temperature of the holes increased. The back nine is particularly strong, flowing over gently rolling countryside with water features adding to the attraction. The par threes are especially good, with the Index 2, 16th, presenting a 177 metre carry over water.

The five golf courses we visited are still expanding, creating the extras that will make this an attractive destination for golfers. Three of the clubs are building self-catering apartments and houses on-site. Sierra is one of these and we spent the night in a very smart apartment block overlooking the 7th fairway. Visitors can rent one, two or three bedrooms… and slip out for a few holes before sunset.

The next day it was off to Tokary Golf Club [www.tokarygolf.pl], 30 km south, the oldest club in the region and currently expanding from nine to eighteen holes. It was the hilliest of the courses and we sped around in buggies that reached G-Force velocity in seconds… not advisable on a course this shapely.
An hour’s drive east of Gdansk is one of the country’s most spectacular courses. As at Sierra Golf Club, signs and scorecards at Sand Valley Golf Resort [www.sandvalley.pl/en/] are in English, something that must be appreciated when you consider UNESCO ranked Polish as the world’s fourth most difficult language.
Sand Valley is a completely sand-based inland links. The course is unlike anything in Ireland or Britain, with fairways up to 150 metres wide in places, bunkers and waste bunkers stretching for a hundred yards, greens of bewitching shapes and ponds scattered about to add a splash of colour. This is a course to be walked and tackled with low running shots. This is old school.
“You will not lose a ball,” Antti, the Finnish CEO assured us with a grin. And, remarkably, given the quality of the golf, we didn’t.
The resort’s lodges are beautifully furnished, sleep four to twelve people and some come with swimming pool, jacuzzi, steam room and barbecue pit. It’s an ideal place to stay and Sand Valley focuses specifically on packages for visiting golfers. Given the quality and intrigue of the course, you will want to play it at least twice.
We had rooms waiting for us in Ostroda, 130 kilometres south east of Gdansk, at the four star Willa Port hotel [www.willaport.pl/en/]. This is all part of the Masurian Lake District, an area known as the Thousand Lakes. It is not difficult to see why and Ostroda is almost surrounded by them.
The 113-room hotel is impressive, not least because of its location on the Drweckie Lake, its two restaurants overlooking the water and its spa. Watersports are a key attraction not surprisingly and, the following morning, I walked along the paths that trail around the lake, watching kayakers prepare for their day and marvelling at a waterskiing circuit that is a six-acre rectangle of overhead wires. No speedboats required.
We headed deeper into Poland’s Lake District, driving east towards Olsztyn, and the Mazury Golf Club [www.mazurygolf.pl].

We arrived to the sight of a dozen children being given a golf lesson on the putting green.
“We offer a free lesson on Sunday to anyone who is interested,” Dorian, the club’s pro told us. “We’re trying to get more people interested in the game.”
In a country of 39 million, where only 3,300 play golf, that is not surprising.
The golf course flows over undulating countryside, with several water features – none more impressive than the par four dogleg 5th, where ponds lie in wait and only the most accurate of drives will find dry land. The course was one of Martin Hawtree’s final designs, and his name may well add to the appeal for international golfers.
Nearby, the five star Marina Golf Club Hotel [www.marinagolfclub.pl/en/] is perched between two lakes. My room was on the ground level, with a small patio area, but I walked past it, heading to the lake’s edge. Here boats and yachts are available for hire but my destination was the pier and a family of swans posing in the lake.
Our evening was taken up with a tour of Olsztyn, a small town with cobbled streets, an Ordensburg castle and a rich history. The wooden fortifications on the castle are over 700 years old. A slightly disbelieving Scandinavian university took one of the fortifications to have its age verified.
Our final meal of the trip was at Karczma Jana, a restaurant on the banks of Olsztyn’s River Lyna. The food was excellent as we sat in a cosy alcove, with wooden beams overhead, enjoying traditional crab soup and perfectly cooked duck. Beer and vodka flowed and we began comparing the golf courses we had visited. Sand Valley was the leader, but there was one more course to come and we were in for a surprise.
Gdansk Golf & Country Club [www.postolowo.com] is back towards Gdansk, just 30 minutes south of the airport. Set in a rolling countryside of natural beech trees, the course was designed by the British architect, Jeremy Turner, in 1992. It is one of the country’s oldest.
This beautiful course oozes character as it slides through trees, and around glorious ponds and lakes. It rates highly in Europe and has serious credentials… including a par 72 of 7,100 metres from the back tees. Blessed with a number of signature holes it is laid out in two equally impressive and spacious loops of nine… allowing those with a sore head to recharge with a beer from the clubhouse halfway around.
As we flew home I reflected on a trip that had taught me much about Poland. The Poles have been coming to Ireland and the UK for so long that it was good to return the favour. And a 2.5 hour Ryanair flight certainly puts Gdansk and its golf courses within easy reach of those looking for a new adventure.
Further information:
www.poland.travel (Polish National Tourist Office)
www.prot.gda.pl (Pomorska Tourist Board)
www.mazury.travel (Warmia – Masuria Tourist Board) 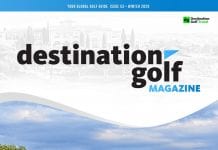 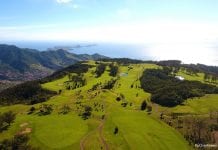 Another beautiful picture from @CorkGolfClub

A January look down the 5th

Golf Among the Grapes in France